The Audit examination revealed a contract awarded to Messrs. Setraco Nigeria Ltd at the sum of N16, 157, 782, 480.20 for the construction of Gbaregolor – Gbekbor – Ogulagha Road Phase 1videaward Ref No NDDC/EDP/DEL/PR/176 dated November 5, 2009. The following irregularities were noted.

The Commission awarded this contract without recourse to due process in the selection of Messrs. Setraco Nigeria Ltd. There was no evidence of any advert placement on National Dailies, no bidding submitted by competitors, no prequalification and evaluations of bids carried out etc.
The Commission’s approval of award of Contract sum of N16,157,782,480.20, is in aberration to the PPA 2007 as this contract sum is above the Parastatal’s Tenders Board approval threshold, which require the BPP certificate of ‘No objection’ and approval of the Federal Executive Council before such contracts can be effected. Consequently, it violates PPA 2007 & FR section 2906 which states that “all contracts or tenders falling within the limits of the threshold prescribed by the Bureau of Public Procurements, except as exempted under the Act, shall attract a “Certificate of ‘no objection’ to award contract for such to be validly executed”.
Examination of the documents presented at the inspection visit to the SETRACO (Nig) Ltd Gbaregolor – Gbekebir – Ogulagha road project office revealed that the sum of N190,956,627.75 was transferred to Messr Chris Oghene Omoru & Co via its Bank Account Number 3592033062 with ECOBANK by SETRACO (Nig) Ltd (Details in Appendix X). The compensation was purportedly paid to the affected persons/ individuals through the Estate Valuer as claimed, but there were no field reports submitted by the Estate Valuer to corroborate this claim. There was also no evidence to confirm that compensations were paid in the presence of CRD, PMD, Consultants etc as required. This payment is in aberration with Financial Regulation No 3104 which frowns at payments for job not executed and the amount involved shall be recovered from the said contractor and shall be black listed and referred to the Economic and Financial Crimes Commission for prosecution.
It was further revealed that Setraco Nig Ltd bought three project vehicles (one Toyota Hilux and two Honda Odessey Elite) at the total sum of N29,817,975.00 which were meant to be for the inspection and use at the project site, but as at the time of the inspection visit, these project vehicles were nowhere to be found on site. Enquiry revealed that the said vehicles were bought and delivered at the NDDC headquarters. It is obvious that the two Honda Odessey Elite bought at the cost of N17, 733, 975.00 were not suitable for project sites.

Risk
Non-compliance with due process: There is a risk of absence of adherence to government rules as regards due process in procurement. Absence of due process may lead to poor job execution/performance, project delay, related party transactions, poor job delivery, non-execution of jobs and loss of public funds.

Recommendations
The Management should explain why due process was compromised in the award of contract to Setraco Nig Ltd and procedures were not followed.
The Management should justify why the sum of ₦190,956,627.75 and ₦29,817,975.00 expended on compensation and procurement of three project vehicles should not be recovered from Messrs. Chris Oghene Omoru & Co and Messrs. Setraco Nig Ltd, respectively. 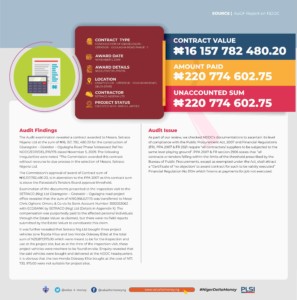 Furnishing of the Academic Office Building

Contract for the studies and design of Amabo-Umuechima Road

EMERGENCY REPAIR OF FAILED PORTIONS ON OPOKUMA AND SPURS IN BAYELSA STATE.