A contract for the construction of classrooms block at Charanci Primary School, Bichi, Kano State, under the Corporate Social Responsibility project, was awarded at the sum of ₦20,830,638.62 (Twenty million, eight hundred and thirty thousand, six hundred and thirty-eight naira, sixty-two kobo), vide award letter Ref. No.: HQ/GM/PROC/CON/C.11/14/89 dated 17th March, 2014 with six (6) months completion period. Reviewing the Bill of Quantities (BOQs), services/works for the
sum of ₦6,216,847.40 could not be ascertained. Physical inspection of the project revealed the following:
• ₦1,750,000.00 (One million, seven hundred and fifty thousand naira) was made for fabrication, delivery and erection of structure steel roof trusses, purling, cleats, bolts, etc., for the roof; however, wood was used instead.
• ₦252,000.00 (Two hundred and fifty-two thousand naira) was made for supply and fixing of suspended concealed grid at 600mm centre filled with 600mm by 600mm stuckervanro pop tiles (Ceiling); this was not constructed.
• ₦23,000.00 (Twenty-three thousand naira) was made for 1 No. entrance door, 40mm thick, finished door size 2125mm X 1200mm, but it was not assembled.
• ₦610,700.00 (Six hundred and ten thousand and seven hundred naira) was provided for the supply and fixing of 21 Nos. aluminum sliding windows with 5mm thick clear glass of various sizes, but metal windows were installed. • ₦93,090.00 (Ninety-three thousand, ninety naira) was provided for toilet roll holders (5 Nos.) @ ₦12,150.00, towel rails (3 Nos.) @ ₦7,290.00, Soap dishes (5 Nos.) @ ₦12,150.00 and Ariston water heater (3 Nos.) @ ₦61,500.00; however, these items was not seen.
• ₦57,000.00 (Fifty-seven thousand naira) was made for 6 Nos. lavatory basins at ₦9,500.00 each, but only 4 Nos. were provided.
• ₦22,000.00 (Twenty-two thousand naira) was made for supply and installation of 1 No. 3000 litres GEE-PEE tank, but this was not seen at site.
• Inspection chambers to link the toilets to the septic/soak away pit and plumbing connections from the same toilets to the soak away/septic tank were not done which showed that the toilets have not been put to use.
• The soak-away pit was not properly backfilled and covered and it stands a
risk of collapsing in the nearest future.

2017 Audit Report of the Federation 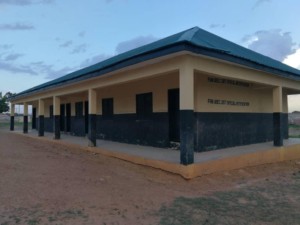 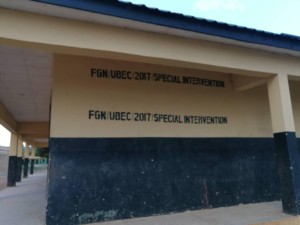 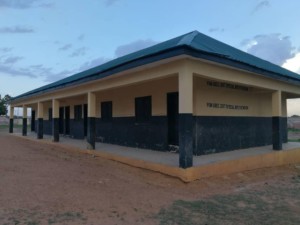 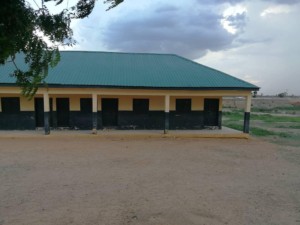 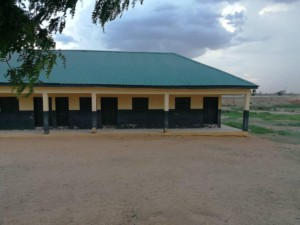 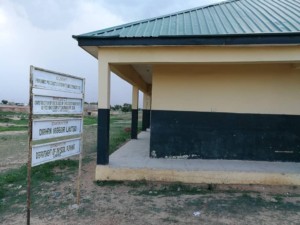 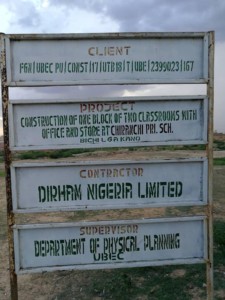 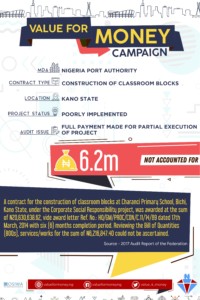 Contract for the Construction of a Small Earth Dam

Construction of a Library Block at the College of Health Sciences